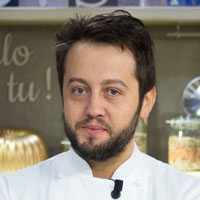 The daughter of Valerio di Fiandra, a master glassmaker from Belgium who was working on the renovation of the Duomo of Milan, married on September 8th 1574 an assistant of her father who liked to use Navelli saffron to dye his work yellow. During the ceremony, the friends of the bride and groom, as a joke, added a good dose of the spice to the rice, and unknowingly created one of the most symbolic dishes of Lombard cuisine as well as a succulent dish. Even if, to tell the truth, the legend is a bit confusing because there are others who claim that it was Valerio himself who coloured the rice yellow. Valerio di Fiandra was a Belgian glassmaker working on the stained-glass windows of the Duomo together with his apprentice nicknamed Zafferano (Saffron), because of his habit of mixing a little saffron with the master's colours to make them bright and vivid. One day Valerio, both serious and witty, at the umpteenth mixing told him that if he went on adding saffron, he would soon end up eating it. As a joke, Zafferano, on the wedding day of Valerio's daughter, in agreement with the cook of the ceremony, added some pistils of the precious spice to the rice with butter. The dish, golden in colour, won over not only the eyes, but also the stomachs of the diners who decreed its success and helped the recipe to spread.

To prepare the Milanese-style risotto with saffron, start with the meat broth: first, you need to blanch the knee, beef ribs and loin bones. Everything only needs to be boiled for about a minute in a large pot with boiling water, then drain the pieces and rinse them well under running water.

Let the kidney fat and sliced veal shanks soak in water for 20 minutes.

Wash and coarsely chop the onion, celery, and carrot.

Also potatoes. In a large saucepan, put the chopped kidney fat and vegetables and begin to gently brown them for 5 minutes over low heat.

Add the well-washed and blanched bones and continue browning for another 5 minutes, stirring occasionally over high heat. Simmer with the wine and allow the latter to evaporate.

Add the spices: bay leaves, sage, cinnamon stick, nutmeg powder, peppercorns, and a pinch of salt. Pour in 2 quarts of water and proceed to simmer for at least 4 hours over moderate heat.

The broth should simmer, and the fat should be left on the surface because 2½ ounces of it will be needed later in the recipe. Rehydrate the hand-broken saffron pistils for about 20 minutes in warm filtered broth.

Submerge the veal shanks in this broth and boil them for 10 minutes. In a large, double-bottomed saucepan, place 2½ ounces of tallow (the fat from the surface of the broth) and reduce slightly to allow the excess water to evaporate. Continue over moderate heat, adding the finely chopped onion (about the size of a grain of rice).

Cook for 5 minutes. Add 4 grams (or two-thirds of a teaspoon) of salt. Pour in the rice, stir quickly and brown for about 2 minutes. Simmer with the white wine and stir carefully to avoid breaking up the rice. Let the wine evaporate, pour in one-third of the hot broth, and keep topping up as it cooks.

Pour in the rice, stir quickly and brown for about 2 minutes. Simmer with the white wine and stir carefully to avoid breaking up the rice. Let the wine evaporate, pour in one-third of the hot broth, and keep topping up as it cooks.

One minute before the cooking time is up (which depends on the rice variety used) add the saffron to the broth.

Add all the marrow, which will dissolve, to the risotto and stir. Then add the grated Grana Padano cheese and continue stirring. Finally, stir in the small cubes of cold butter until creamy. Your Milanese-style risotto with saffron is ready to be served!

Remove the saucepan from the heat, take the veal shanks out of the broth, and extract the marrow while it is still hot.

Finally, stir in the small cubes of cold butter until creamy.

Your Milanese-style risotto with saffron is ready to be served!

Zucchini risotto is a simple first course that's perfect for spring menus, and it can be made especially creamy by stirring in cheese and butter.
READ
Rice and Grains

Pumpkin risotto is a traditional dish from Northern Italy, in particular Lombardy. It is easy to prepare but also very tasty.
READ
First Courses

Saffron risotto is a simple and tasty first course, characterized by its unique and unmistakable taste and color!
READ
Rice and Grains

Lemon and shrimp risotto is a very tasty first course with a delicate flavor. A simple recipe that can be made all year round.
READ
Rice and Grains

Oven baked rice is a genuine first course. It's easy to make and brings the Mediterranean aromas and flavors to the table.
READ
Rice and Grains

Pumpkin and gorgonzola risotto is a creamy first course, perfect for the fall. Here, the sweetness of the pumpkin meets the spicy notes of the…
READ
First Courses

Risotto all'amatriciana is a variant of the classic pasta dish from Lazio. This time we use rice to prepare a very tasty risotto seasoned with…
READ
Rice and Grains

Speck, radicchio and caciocavallo risotto is an excellent first course that sees the combination of tasty ingredients: meat, vegetables and cheese.
READ