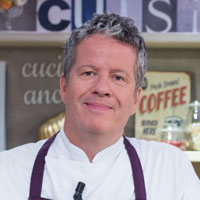 Tiramisu is a unique dessert mainly because of the path of its origins: from households to inns and restaurants before finally reaching pastry shops. It is a deeply Italian dessert: ladyfingers are from Piedmont, mascarpone cheese comes from the Lodi area, coffee arrives from the ports of Venice and Trieste, cocoa is introduced by the Genoese, and eggs are that local variation that characterises the dessert. It also owes some inspiration to Bavarian spoon desserts, the French charlotte, and especially the Piedmontese Dolce Torino, a recipe already described by Artusi in which rosolio, alchermes or rum bagne are used.

Per la placca da forno (per i savoiardi)
Sugar

For the chocolate tiramisu, start with the ladyfinger mixture. Separate the whites from the yolks and whip the latter with an electric whisk, adding 2 ½ oz. caster sugar and seeds from the two vanilla beans. The result should be a white frothy mixture.

Now beat the egg whites with a spotless electric whisk (there should be no trace of yolk whatsoever). Once you’ve started to whip them and they’ve begun to froth, add 3 oz. caster sugar while continuing to whip: you should form stiff peaks.

Pour the yolk onto the white and and delicately mix from bottom to top (so as not to pull the mixture apart) using a bowl scraper. Sift the potato starch and the flour.

Add the starch and flour to the egg mixture and continue to mix very delicately, from bottom to top, with the bowl scraper. Place the mixture in a pastry bag with a ½ inch tip. Proceed to squeeze the ladyfingers out onto 4’’ wide strips of parchment paper; the sticks should be about 3’’ long.

Take a sheet pan and cover it with caster sugar. Take care in lifting each strip of parchment and dipping them onto the sugar: this will make the surface of each ladyfinger perfectly sugared. Then flip the strips over again, and lay them on a baking tray: 10 – 12 minutes in a pre-heated 374° F oven. The ladyfingers should be golden.

For the dip: prepare 3 ½ ounces of espresso coffee and let it cool, then pour it into a bowl and add the coffee liqueur. Prepare the cream: pour the egg whites into a bowl and start beating them with a clean whisk; when they’re nice and foamy add 2 ounces of sugar and beat them into peaks. In a separate bowl add the mascarpone cheese, 2 oz. of sugar and the seeds from the two vanilla beans.

Add the egg yolks and use an electric whisk until the mixture is even. Now partially whip the fresh liquid cream and add it to the yolk mixture. Use the whisk to mix everything together.

At this point add the grated 70% dark chocolate and the finely crumbled salted caramel (optional). Finally, add the egg white peaks and delicately mix with a bowl scraper from bottom to top. Now you can prepare the 4’’ diameter mould, ideally lined with acetate.

Split 6 ladyfingers in half, trim them slightly so they’re uniform and brush the trimmed parts with the coffee dip. Place the ladyfingers around the mould so the entire perimeter is perfectly lined, with the rounded parts upright.

Place 3 ladyfingers side by side and round them with a 3’’ pastry ring. Brush the surface with the coffee dip and lay them at the centre of the ring. Then wet the inside of the standing ladyfingers as well.

Cover with a generous layer of mascarpone cream, and then place another 3 rounded ladyfingers, brush them with the dip and cover with more cream. Level the final layer of cream with a bowl scraper. Keep for 10 minutes in the refrigerator.

Powder the surface with un-sweetened cocoa powder. When serving, delicately remove from the pastry ring and enjoy your chocolate tiramisu!

The gourmet tiramisu is the special version of the most loved dessert by the Italians by Master Pastry Chef Iginio Massari, with homemade…
READ
Soft desserts

Zuppa inglese (Italian trifle) is a typical dessert from Emilia Romagna that has become a classic Italian pastry. Layers of double cream and…
READ
Cookies

Ladyfingers are classic biscuits, simple and versatile. So soft and frothy they can be enjoyed alone or as a base for tiramisu.
READ
Sweets and desserts

Nutella tiramisu is a super delicious dessert, perfect to end a dinner with .... no one will be able to resist!
READ
Cakes

The mascarpone and chocolate chips tart is a delicious and creamy dessert, a greedy variant of the more traditional tart.
READ
Ice creams, sorbets and parfaits

Stracchino della duchessa is a sweet and delicious semifreddo made with mascarpone cream flavored with amaretti, cocoa and almonds.
READ
Small pastries