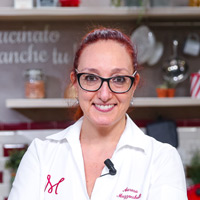 “Beauty is only fleeting, but goodness is forever.” This old Emilian proverb is the perfect introduction to this recipe for the centuries-old favorite: tortellini! Shaping these little gems of of fresh pasta, made with great love and care, is poetry in motion itself – and that’s before we even mention their exquisite flavor. That said, there is a degree of careful calculation involved, too, from the size of the pasta square, which usually varies from 1-2 inches (2.5 to 4 cm), to the weight of the filling, consisting of carefully measured parts of pork loin, mortadella, and prosciutto, and plenty of Parmigiano Reggiano cheese. Tradition also had it that a certain number of tortellini in broth should fit on the spoon, providing proof of the perfect sizing! The recipe for tortellini, registered with the Bologna Chamber of Commerce and codified by the Brotherhood of the Tortellino, varies to a greater or lesser extent not only between Bologna and Modena, but also from one neighborhood to another and one family to the next. We turned to expert Emilian chef Aurora Mazzucchelli, who, with great skill and passion, showed us how to roll out the fresh pasta with a long rolling pin, as tradition would have it, and how to seal the tortellini before plunging them into the broth. Buon appetito, everyone! If you, too, like to enjoy your tortellini in lots of different ways, why not try making a timbale, frying them, or dressing them with cream and prosciutto, broth, or even just fresh tomatoes!

How to prepare Tortellini

To prepare the tortellini, first take care of the filling, which will need to rest in the refrigerator for 12 hours. Take the prosciutto and the mortadella, remove the toughest parts, and remove the rind from the prosciutto. Next, roughly chop everything 1, including the loin, into chunks of around the same size. Pass the mixture through the meat grinder on a medium setting 2 and collect the ground meat in a bowl 3. Don't put the meat grinder away just yet as you'll need it again later on.

Add the grated Parmigiano Reggiano 4, a pinch of salt (not too much, as the filling is already very flavorful, and you can always add more later on), and a pinch of pepper to the ground meat. Start mixing with your hands and add the egg 5, along with the grated nutmeg 6. Feel free to add plenty of nutmeg, as Bolognese tradition dictates.

Mix with your hands until the mixture is smooth 7. Pass the mixture back through the meat grinder, this time on a finer setting 8. Knead again by hand, cover with plastic wrap and leave to rest in the refrigerator for 12 hours. This allows the flavors and aromas to develop and blend more thoroughly. Once this time has passed, start preparing your egg pasta. Pour the flour onto a pastry board and create the classic well shape 9.

Pour in the lightly beaten eggs 10 and start mixing the ingredients with a fork 11, gradually incorporating the flour from around the edges. Then, knead your dough by hand 12, working from the outside in.

Continue to knead like this, rotating the dough, until the mixture is consistent 13. Cover with plastic wrap and leave to rest for 30 minutes at room temperature 14. Once rested, remove the plastic wrap and place the dough on the pastry board 15.

Flatten it with your hands and give it a round shape 16, then roll it out using a long rolling pin 17 until you are left with a very thin sheet 18, so thin that when you lift it up you can see what’s behind it.

Using a pasta cutter, slice the pasta first into vertical strips 19 and then horizontally 20 to make small squares 21. The sides of your squares should measure 1 to 1¼ inches (2.5-3 cm) at most.

Place a dollop of filling in the center of each square 22. Take one, fold it over to form a triangle 23, and press the edges together lightly. Now lower the two side edges, bring together with a sort of pinch 24, and turn the tortellino around your finger.

Seal by pinching the two edges of the dough 25 and your first tortellino is ready 26. Do the same with all the others, arranging them on a tray with a dish towel 27 as they’re ready. Your homemade tortellini are ready to be cooked in broth or with your favorite sauce!

Freshly made tortellini can be frozen, but they must be kept separate from one another for the first 30 minutes before being placed together in a freezer bag. If you don't want to freeze them, allow them to dry thoroughly and store them, either cooked or uncooked, in a tightly sealed container in the refrigerator for up to a day.

If you are using a pasta machine to roll out the dough, we recommend combining two different types of flour: all-purpose and double-milled semolina. This will give you a coarser, more substantial dough.

The recipe for tortellini varies from one family to another, in addition to the differences observed between the versions hailing from Modena and Bologna.

_The method for sealing the tortellini also depends a lot on family tradition.

_In more modern versions, the dough is rolled out using a pasta machine, in which case it’s advisable to make your dough by mixing 1? cups (200 g) of all-purpose flour with ? cup (100 g) of double-milled durum wheat semolina flour.

_Some versions sauté the meat for the filling in a pan with butter before combining it with the rest of the ingredients.

_ Some versions use other types of meat in addition to or instead of loin.

_ The filling should be allowed to rest for 12 to 24 hours in the refrigerator.

Legend has it that, engaged in a 12-year battle over the theft of a bucket, Bologna and Modena asked the Gods for help in resolving the issue and ending the long war that had waged between them. Having come down to earth to help the people of Modena, Bacchus, Mars, and Venus found themselves spending the night at an inn on the border between the two warring cities. And so it was that the innkeeper, himself of Bolognese origin, won over by Venus’ dazzling beauty, decided to create the perfect reproduction of the navel he had glimpsed using the thin pasta sheet he was preparing in the kitchen. Another version of the story maintains that the navel in question was, in fact, that of Lucrezia Borgia, who had stopped at the inn to rest during one of her trips. There have been many variations on the traditional tortellini since they were first invented, most of them relating to the delicious fillings they’re made with.

Tagliatelle is an egg pasta typical of the city of Bologna, one of the tastiest fresh pasta shapes with ragù and other condiments!
READ
Bread

Let's cook the Neapolitan casatiello together with Roberto Di Pinto! It is a leavened product of the Neapolitan tradition to be served and…
READ
Pasta

Cavatelli is a type of fresh semolina pasta typical of Molise and Puglia. Find out here the doses and procedure to prepare this recipe!
READ
First Courses

Tortellini with ham and cream

Swallow's nests are small pinwheels of stuffed egg pasta, a tasty and succulent first course that will conquer your diners!
READ
Homemade Pasta

Ricotta cheese and spinach ravioli are one of the best-known preparations based on fresh egg pasta, perfect for parties and meatless days!
READ
Homemade Pasta

Ricotta and spinach cannelloni are a classic first course for Sunday lunch or for holidays. An alternative to the classic meat sauce!
READ
Single Courses

Fried pizza with mortadella and fiordilatte cheese is a typical Neapolitan street food. This warm, fragrant dish with melted cheese is a real treat!
READ