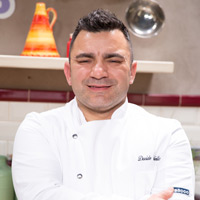 The term pizza has long been used since very ancient times: not only in Italy, but all over the Mediterranean basin, there are foods with similar names. Since the Middle Ages, it has indicated many different things, shapes of usually round loaves as a base for other ingredients, shapes of stuffed loaves, various kinds of flat breads. In Italy alone, there are different variations on the theme: Neapolitan, Roman, Palermitan, Turinese, long peel, rectangular, synchronous, and fried. Every pizza is distinct and contextualized in a national system. The doughs of flour and water represent the moment in which man went from being a nomad to becoming a resident and first domesticated wheat. Giving a round shape to the dough itself and baking it on a hot surface, or in an oven, started in ancient times, of which we have traces in both Mediterranean and Asian territories.

To prepare Neapolitan pizza, you’ll first need a madia, which is a traditional wooden box used for kneading dough. Pour the water inside, add the salt and sugar.

Stir until dissolved, then pour in more than half of the flour. Arrange the fresh brewer's yeast in one hand and flour the other.

Crumble it between your hands over the mound of flour, rubbing it in. Start mixing with one hand until the flour has absorbed the water.

Add some more flour and mix again with one hand. Continue in this way until you run out of flour, or at any rate according to the consistency of the mixture.

Pour in all the oil and continue kneading with one hand until the oil has been completely absorbed.

Transfer the dough to a counter with a light dusting of flour and begin kneading with two hands. While kneading, if necessary, you can add a dusting of flour on the counter. Knead in this way for at least 20-25 minutes, until the dough is smooth and not sticky. Roll into a ball and cover it with the breadboard. Let it rest for 15 minutes.

After the resting time has elapsed, the dough will have loosened; knead it lightly again. Work the dough, forming a ball and place it in the madia. Cover with the lid and let it rest for 40 minutes.

After 40 minutes, take the dough and proceed to the hand-shaping phase. Divide the dough into two parts and take one. Start rounding the initial part with your left hand. Now squeeze it between your thumb and forefinger to form a ball and break it off at the same time.

Now make it rounder on a work surface to get a more precise ball. The easiest way to stretch the dough at home is to divide the dough into 9-ounce (250-260 g) pieces.

Roll it on the counter to seal the base well and obtain a spherical shape. Transfer the balls to the madia, spaced well apart. Cover with the lid and let them rise at a temperature of 64-75°F (18-24°C) for 8-12 hours

Pour the peeled tomatoes into a bowl and mash them by hand. Season with salt, a drizzle of oil, and hand-ripped leaves of basil.

Now turn to the fiordilatte mozzarella cheese. Cut it in half and then into slices. Finally cut out sticks, not too thick, but not too thin either.

When the balls in the madia have almost risen, start managing the oven. Place a refractory stone inside and heat it to full power 30-40 minutes ahead of time or even 1 hour if your oven is not powerful enough. Quickly roll both sides of the dough in the flour. Now, to roll out the dough, join your hands together and create a triangle with your index fingers and thumbs almost overlapping. Press lightly starting from the centre of the dough and proceed towards the edges, to send air to the edge and create the crust. Repeat 3 times, then lift the dough gently and flip it over.

Try not to handle the dough too much and don’t extend it abruptly by pulling on one of the edges, to avoid it shrinking. Now, holding the dough firmly with one hand in the centre, pinch the dough sideways with your index and middle fingers, as if they were scissors, pull gently to extend it and flip it over to the palm of your other hand. Roll it back onto the surface gently, rotating it slightly. Don’t roll out the dough completely; just halfway. This way you won’t risk breaking it once you put the topping on. Add the peeled tomatoes, leaving a free edge, but covering the middle well.

Then add the fiordilatte mozzarella, without overdoing it, and the grated Grana Padano cheese. Add the fresh basil by breaking it into pieces with your hands and a drizzle of extra-virgin olive oil.

Lift the pizza, transfer it from the counter towards the peel, and gently spread it out with your hands. Transfer it to the oven at the highest temperature by placing it directly on the refractory stone, bake for 5-7 minutes. Remove from the oven and serve immediately.

Ligurian cheese focaccia is a regional specialty born in Recco: it is a thin focaccia stuffed with crescenza cheese. Discover the quantities…
READ
Leavened products

The pizza dough is a basic preparation made with flour, water, yeast, oil and salt from which you can obtain various types of pizza.
READ
Pizzas and Focaccia

Among the pizzas, the margherita pizza is the simplest and most loved one; a fragrant homemade pizza with tomato, mozzarella, oil and basil.
READ
Single Courses

Panettone is the classic Christmas cake of Milan, famous all over the world. Homemade panettone is simpler than you might think, so let's…
READ
Bread

Let's cook the Neapolitan casatiello together with Roberto Di Pinto! It is a leavened product of the Neapolitan tradition to be served and…
READ
Pizzas and Focaccia

Danubio salato (savory pull-apart bread) is a unique Italian recipe: a savory brioche dough shaped into several balls to be shared as a…
READ