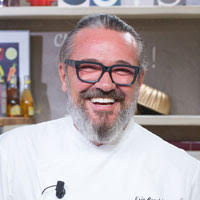 Focaccia is an institution of Ligurian cuisine. Focaccia with cheese from Recco, or focaccia col formaggio, is another typical delicacy. The history of focaccia with cheese begins at the time of the Third Crusade when farmers from Recco, forced to take refuge in the hinterland because of Arab invasions from the sea, only had water, flour, oil and cheese at their disposal, so they invented this type of focaccia, which has remained in the local gastronomic heritage. At the end of the 19th century, when the first taverns began to appear, focaccia with cheese was included in the menu but was served only during the period of the remembrance of the dead. At the beginning of the 1950s, with the development of tourism, focaccia with cheese became one of the most popular dishes sought by tourists and for this reason, innkeepers and bakers began to serve it not only around the period of the remembrance of the dead, but throughout the year.

To prepare focaccia with cheese, start by pouring the flour 1 into a food processor fitted with a hook, then the water at room temperature 2. Add the salt 3

and pour in the oil 4. Work at low speed 5, until a smooth and homogeneous dough is obtained 6. If necessary, stop the machine and push the mixture down the sides with a rubber spatula. This will take about four or five minutes. Once the ingredients are blended, continue at a higher speed (but not very high) for another 4-5 minutes.

Then transfer the dough, which should be smooth and homogeneous, onto a work surface 7. Lightly sprinkle the working surface and the dough with flour, then flatten it slightly and fold it, bringing the edges of dough inwards alternately. Wrap with plastic wrap 8, or cover with a bowl or cloth. Let the dough rest at room temperature for 20 minutes. Divide the dough into 4 loaves: two slightly smaller 9 and two slightly larger. They will serve as a base and top for the 2 focacce.

Swirl the portions of dough on the worktop, giving them a spherical shape 10 and pinch the base with your fingers to seal the shape. Put them on a tray with the seal on the bottom, place them well spaced and cover them with plastic wrap 11, before storing them in the fridge for about 1 hour. After this time, leave the dough at room temperature for 10 minutes to make the rolling out easier. Pick up one of the larger loaves, leaving the others covered. Dust the worktop with a little flour and push the dough down lightly with your hands, then take a rolling pin and start rolling it out 12.

You will need to make a rectangular sheet 13, larger than the 8x15-inch (20x40 cm) baking tray. The dough should be paper thin. You can raise the sheet and see where the dough is thicker and needs to be rolled out further. If the dough tends to shrink while you roll it out, wait a few minutes before continuing. In the meantime brush one of the two pans with 3/4 tablespoon (10 g) of extra virgin olive oil. Then lay the sheet of dough on the baking tray, letting the sides come over the edges of the tray 14. Place about 1.5 cups (400 g) of crescenza cheese, in pieces, alternating one row with three pieces and one with two. Space pieces about one inch apart 15. Brush with oil.

Roll out one of the two smaller balls of dough. You will always need to obtain a sheet of dough larger than the baking tray 16. The thickness of the top piece should be even thinner than the base, as if it were a veil 17. Pass your hands underneath the pulled dough, then lift with the back of your hands. Be careful not to tear the dough and lay it on top so that it sticks out over the pan’s edges 18.

Seal well by applying light pressure on the edge 19. Then, pinching with your fingers, make a few holes: 3 in a row will be fine, right over the cheese 20. This way, the dough will bake evenly with no air bubbles 21.

Now you have two alternatives: the first is to sprinkle a few drops of oil on the surface using a well soaked brush. The second consists in making a brine with a little water, a pinch of salt and a little oil 22 that you can brush on the surface. For a home oven we recommend this second technique (23-24).

Pass the rolling pin over the edges 25 to remove the excess dough 26. Always lightly press the edges to seal, bake in a static oven preheated to 480°F (250°C) for about 7-8 minutes. As oven temperatures vary slightly, adjust the baking time accordingly. In the meantime, prepare the second focaccia. Once ready, take out the first 27, bake the second and serve it cut into squares.

Focaccia with cheese should be traditionally stuffed with Prescinseua, a typical fresh Genoese cheese made with ricotta and yogurt, which is not easy to find. This is why Crescenza cheese is used more frequently.

Salt, which is added to the dough of the cheese focaccia, has two important functions: it is a thickener and an antibacterial agent.

If the dough withdraws by rolling it out there can be two reasons: it did not rest long enough or the flour was too strong. The solution is to cover with a cloth and let it rest before rolling it out.

If the dough is torn by rolling it out then the flour used was too weak. In this case a stronger flour should be used and more water should be added to the dough. With experience you will find the right balance to ensure an excellent result!

Fried pizza with mortadella and fiordilatte cheese is a typical Neapolitan street food. This warm, fragrant dish with melted cheese is a real treat!
READ
Pizzas and Focaccia

Pizza margherita (tomato and mozzarella pizza) is the simplest and most popular of all pizzas; a fragrant homemade pizza with tomato,…
READ
Leavened products

Focaccia alla genovese, or fügassa in the local dialect, is a typical Ligurian specialty and has become an icon of the Slow Food movement.
READ
Leavened products

Soft focaccia is a soft, tall focaccia seasoned with coarse salt and rosemary, which can be enjoyed on its own or stuffed with cold cuts or vegetables
READ
Homemade Pasta

Making fresh egg pasta is child's play when you follow our tips for preparing the pasta dough and all the different shapes!
READ
Sweet leavened products

The quick Easter Colomba cake is a faster version of the traditional recipe for this dessert. It requires fewer leavening phases.
READ
Leavened products

Danubio salato (savory pull-apart bread) is a unique Italian recipe: a savory brioche dough shaped into several balls to be shared as a…
READ
Leavened products

Panzerotti, or fried calzones, are typical of Apulian cuisine: leavened dough stuffed with mozzarella and tomato, then fried! Delicious!
READ