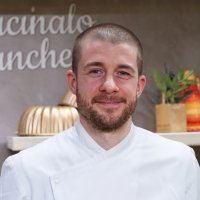 For greasing
Vegetable oil to taste

How to prepare Cinnamon rolls with liquid sourdough starter

To make cinnamon rolls with liquid sordough starter, place the water 1, milk 2 and brown sugar in a planetary mixer bowl 3.

Add the cinnamon 4, switch on the planetary mixer and stir all the ingredients together, before adding the liquid sordough starter 5 and the brewer's yeast 6.

Add the flours 7 and mix at a medium speed once more. Lastly, add the salt 8 and mix to obtain a homogeneous dough 9. Leave to rest in the bowl for 30 minutes, without covering it.

Once the time is up, add half of the softened butter 10, then the other half 11 and continue to blend with the planetary mixer at a medium and then at a fast speed. Once the butter is thoroughly incorporated 12, leave the mixture to rest for an hour, at room temperature.

After an hour, place the dough on a worktop, slap and fold it to reinforce it and make it more compact 13. When the dough becomes nicely smooth and taut 14, place it in a bowl greased with some oil, cover with plastic wrap and leave to leaven in the refrigerator for around 10-12 hours 15.

Prepare the filling just before the dough fully leavens: place the softened butter and demerara sugar 16 in a bowl, add the cinnamon 17 and stir with a spatula to thoroughly incorporate the ingredients 18.

Now take the dough and start opening it out with your hands 19, then sprinkle with a little flour and roll it out with a rolling pin 20 to form a 13x15 inch rectangle 21.

Spread two thirds of the filling over the entire surface of the rectangle 22, then tightly roll it along the longer side 23. Wrap the roll in the parchment paper 24 and leave to firm up in the refrigerator on a tray, for an hour.

Once this time is up, cut the roll into 12 pieces of equal width 25. Place the rolls on a tray lined with parchment paper 26 and leave to rise at room temperature for 2 hours. Once leavened 27, bake the cinnamon rolls in a ventilated oven at 400?F for 20 minutes.

In the meantime, prepare the glaze: place the remaining filling in a saucepan 28, add the cream 29 and bring to the boil, stirring thoroughly all the while to make sure the sugar dissolves 30.

Cinnamon rolls can be stored at room temperature for up to 2 days.

You can freeze them after baking and thoroughly cooling, better without glaze.

Alternatively they can be frozen before baking, fully leavened: just be sure they return to room temperature before proceeding with the recipe.

Liquid sordough starter combined with brewer's yeast encourages leavening in all conditions, even without a leavening chamber.

Liquid sordough starter should be refreshed at least 2-3 hours before use and left at room temperature to ferment.

Reinforced bread flour is a type of flour that is particularly rich in proteins: as an alternative you could use manitoba bread flour.

If you want to replace liquid sordough starter with solid brewer's yeast, use the same amount and if necessary, just add a spoon of water to the mixture.

Nutella swirls is the perfect and delicious snack, with an irresistible whirlwind of double-flavored biscuit dough and delicious hazelnut cream.
READ
Cakes

Pear and chocolate panettone is a version of this classic dessert, prepared by the pastry chef Andrea Tortora. Discover the recipe for making…
READ
Sweet leavened products

Homemade pandoro is a great Christmas classic, sweet and soft to sprinkle with icing sugar. Discover doses and recipe to make it!
READ
Sweet leavened products

Danubio dolce (sweet pull-apart brioche) is a soft cake made of many balls of leavened dough. This version hides a custard heart impossible to resist!
READ
Pizzas and Focaccia

Soft focaccia is a soft, tall focaccia seasoned with coarse salt and rosemary, which can be enjoyed on its own or stuffed with cold cuts or vegetables
READ